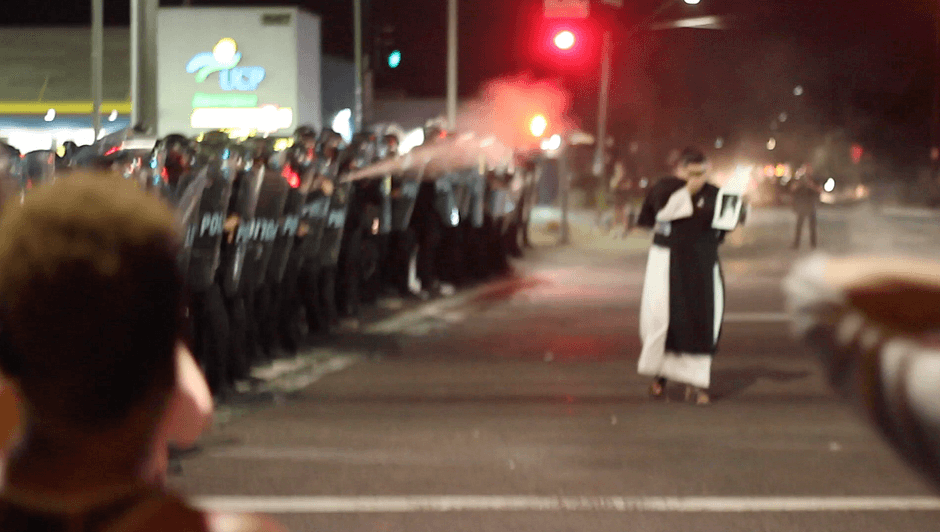 A six year project by artist and filmaker Chris Vena, 48 under 45 documents the public protests, confrontations and conversations that have happned over hot button topics in state 48. Demonstrating the many ways that Arizona has been a battlefront in the struggle for racial justice in the United States since before it was a state, this film gives the viewer a first-person account of the battelines around voter suppression, racial discrimination, and violence toward minorities. At the heart of these debates in the present is the passage of SB1070, which extends Jim Crow like policies that continue to allow Arizona to be one of the most violent police forces in the country with little to no fear of legal reprecussions, disciplinary action or the threat of dimissal from duty. 48 under 45 demonstates that the strongest forms of resistance to police brutality have come form of Chicano, Native, and more recently, the Black Lives Matter movements. An experimental documentary film by Chris Vena, it is a testiment to guerrila-style reportage that sets you in the heart of the debate and the heat of the action. This is a realist document that everyone who is politically engaged today should watch if they want to go beyond sound bytes culture and the polemic positions of hyper-polorized politics today.

Bio: Chris Vena is a painter, photographer, and videographer with whose work is concerned with the personal experience of those engaged in political struggle. He received a BFA from the San Francisco Art Institute in 2003 and a MFA from Arizona State University 2017, having studied painting and drawing at The École nationale supérieure des beaux-arts in Paris, France on exchange in 2000.