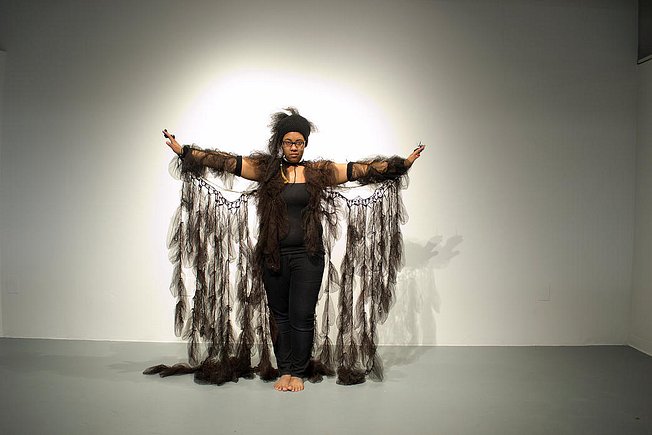 The works of Cydnei Mallory rely on visual and conceptual strategies that issue from the felt quality of maintaining a sense of tension. Her pieces do this not only by using formal strategies of suspension, but they challenge our expectations about how social sculpture functions by pointing to the kinds of strained relations that include the contradictions of class, culture, race and sexual difference. This is evidenced in her works in the way they are installed, orchestrated and illuminated. Towards this end, Mallory’s pieces are often strung up, clumped together or even splayed out on the floor or the gallery walls, but rarely do they allow the viewer a quiet space of repose. A few of Mallory’s earlier pieces like “Could you choose the same path” block the viewer from entering the gallery space by creating a system of tightly stretched bungee cords that quarter off the white cube, and which prevent the viewer from seeing the work in the round. Her "Untitled" hair net piece in a public elevator, while not as restricting, still disrupts the corporate lift system by bringing a motif of the service industry into the elevated heights of the white-collar world. And even when her objects are more discrete in nature, Mallory often uses a kind of stage lighting that overlays the viewing experience with so many weighty projections that have to be negotiated with just as much bodily awareness as is demanded by her public installations.

And yet, while all of Mallory’s works play with a strong sense of positive and negative space, they have a performative bent to them inasmuch as they are never installed in the same way twice. Instead, her pieces not only interact with the sway of gravity, grid systems, knots and nooses, but they act as open ended signifiers for various histories of oppression and subjugation. Rope, hairnets, and anonymous faces made of adhesive tape all talk about the conditions of privilege and the closing off of certain voices within a greater economy of restrictions. The aestheticization of objects that have a history of participation in anything from labor practices to lynching are often re-presented in Mallory’s installations through the dialectic contrasts of structure and improvisation, obfuscation and recognition, geometric rigor and bodily figures. In other words, in Mallory’s art practice the formal strategies of high art are abutted against the superstructure of what are more broadly considered to be social concerns, ultimately implicating the viewer in the metastasis of enjoyment, i.e., a conflicted sense of spectatorship. Thus, the critical dimension of her project issues from using tactile forms and a considered sense of design in a way that underscores the political dimension of everyday materials.

This is foregrounded in her installation piece "Accumulation", where we not only see the agglomeration of material hair nets in the space of the gallery, but also how this netting is implicated in both the politics of presentment and the rhetoric of visual presentation. Furthermore, Accumulation acts as a public work that is on display 24/7 in the gallery windows in much the same way that labor practices in the blue-collar industry are also associated with being open for business 24 hours a day. As such, "Accumulation" acts to make a single element of those who are employed but unseen into something of a tangible artifact by contrasting two different systems of our present day economy in one and the same aesthetic proposition.

One might even go so far as to say that the ways in which Mallory has composed the hairnets --- which have something of a hexagonal or honeycomb like weave to them --- could be said to serve as a kind of metaphor for the net that low wage workers create for a culture of conspicuous consumption. Of course, the harvesting of social energy, which is to say the sweet necture of surplus value, and the heiarchy of command that makes it possible, are not unlike the plight honeybees face inasmuch as bees also represent another community which has been pushed to the edge of extinction by human hubris. In this way, "Accumulation" ultimately points to the many ways in which we are all ensnared in a web of interdependent social relations that often goes unacknowledged, and which allows the upper class to grow ever richer while the large majority of the working world continues to live off of subsistance wages, or really, wages that fall far below the poverty line. Furthermore, this ‘net’ of workers is also directly implicated in art world parties, catered events and museum galas, not to mention, the labor force that services the domestic needs of today’s collector class. And from here, it is but a short jump to thinking about the broader implications of border politics, immigration policy, and the greater political economy not only of America, but of the relations between first and third world nations in the age of globalization.

Thus, by linking micro-political interventions in the genre of re-appropriation art with macro-political themes Mallory is able to use the formal beauty of line, shadow and form to ask questions about the politics of invisibility, both in the history of social sculpture as well as society at large. Whether making herself part of the play of objectification in her performances, or allowing her pieces to perform as solo acts in public spaces, Malloy’s works are not gesturing to the Brechtian theater of cruelty, but to a theater of much greater import, which consists of the roles we play in life. The stage, the means of staging, and those voices that are not allowed on stage, or which are simply kept out of sight, represent the ‘figurative element’ in Mallory’s aesthetic program. And for gesturing toward the possibility of representing the unrepresented through a myriad of different strategies, her art practice is of growing purchase in the contemporary moment because it serves to underscore the contested nature of privilege in cultural discourse, which is to say, her works invite a conversation about the intersection of aesthetics and politics as a lived experience. And for this, Mallory’s art practice could be said to court the performative in a rather provocative way, which is a rare accomplishment in the conservative ‘court’ of fine art practices today.

Bio: Cydnei Mallory is currently an M.F.A. graduate student at ASU. She received her B.F.A. from Pennsylvania State University. She has regularly shown her work in Pittsburgh and State College PA. She has participated and shown at national and international conferences including the conference on Contemporary Cast Iron Art held in Pedvale Latvia.